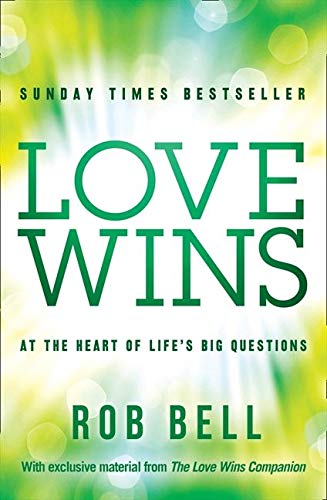 I wrote this review of Love Wins by Rob Bell in June 2011. Much like the book itself, it’s fairly irrelevant now. However, I wanted to include it on the site for the curious.

Over the last couple of months, several people have asked me what I thought of Rob Bell’s book, Love Wins. I hadn’t read it, but I watched the trailer (which is often enough for me to form opinions about movies). I also watched enough interviews with Bell that I thought I could put together an opinion—and maybe a sermon. But one friend of mine kept insisting that I needed to read the book before I could comment on it. I finally gave in, went to Wal-Mart, dropped $16.95 on this barely 200-page book, and started reading.

First of all, I have to say that I did my best to keep an open mind. I don’t know much about Bell. He seems to have made all the right people mad over the last few years. I kind of like that. My daughter loved his Nooma videos, which said a lot to me (she’s a very discerning person). Several people told me I needed to read Velvet Elvis, and I genuinely considered buying it once or twice.

So this was the first time I had ever read anything by Rob Bell.

No really. First time. Ever.

My first impression was that this guy’s writing style is horrible. Maybe it’s a reflection of the whole “post-modern-Generation-X-OHH-LOOK!-A-SQUIRREL!” kind of thing, but it’s just plain awful. Paragraphs have no real cohesion, some paragraphs aren’t even paragraphs. Add to it that the editor put 3/8ths of an inch around each paragraph, and you have this sense of randomly jumping from sentence to sentence and point to point with nothing really holding it all together.

Many pages looked like horribly failed attempts to write haiku.

Now, onto his point: Bell’s point seems to be that he’s not a universalist. But hell’s a bad place and God is good and wouldn’t want anyone to go there, even if they never acknowledge Jesus as Lord. So God is going to save everyone and—oh, by the way—I’m not a universalist.

See, Rob Bell, I can write like that too. It doesn’t take talent.

I’m Not a Universalist; I Just Sound Like One

I honestly believed him for the first 2/3rds of the book when he said he wasn’t a universalist. Then I got to some paragraphs that made it hard to believe him. Stuff like this:

At the heart of this perspective is the belief that, given enough time, everybody will turn to God and find themselves in the joy and peace of God’s presence. The love of god will melt every hard heart, and even the most “depraved sinners” will eventually give up their resistance and turn to God.

Then later, on page 154, he comments on John 14:6, “Jesus answered, ‘I am the way and the truth and the life. No one comes to the Father except through me.’”

What he doesn’t say is how, or when, or in what manner the mechanism functions that gets people to God through him. He doesn’t even state that those coming to the Father through him will even know that they are coming exclusively through him. (emphasis mine)

How am I to marry that statement with scriptures like Romans 10:9, “if you confess with your mouth, ‘Jesus is Lord,’ and believe in your heart that God raised him from the dead, you will be saved”? Or Acts 4:12, “Salvation is found in no one else, for there is no other name under heaven given to men by which we must be saved”? The key in these scriptures is knowing WHO it is that’s saving you. Not getting to judgment day and saying, “I’m with that guy…y’know…Whatshisname.”

Asking Questions that Can’t Be Answered

Much of the content of Love Wins seems to have been written in response to questions from people who don’t know what they’re talking about. It’s like Bell is responding to the guy who first asked, “Can God make a rock so big that even he can’t pick it up?” I’m not saying that the questions he asks don’t matter, but they need to be asked within a proper framework. Instead, Bell chooses questions that tug at your heartstrings and confront the worst horrors of society. I lost count of how many times rape was mentioned. But Bell asks his questions from a Biblically illiterate perspective, and–rather than correct that perspective–he condones it. This leads to Biblically illiterate answers.

Like any writer defending his position, Bell sets up several strawmen. But his strawmen are weak, their points are inane, and his defense is…well…indefensible.

At the heart of Bell’s book is this idea that goes contrary to all of Christian theology (though he insists the idea has been around for 2000 years). Bell suggests that once someone experiences eternal hell, they’ll decide it’s just not for them, convert, and be welcomed into Heaven. It’s a very nice idea, but it flies in the face of scriptures like Hebrews 9:27-28, “man is destined to die once, and after that to face judgment, so Christ was sacrificed once to take away the sins of many people; and he will appear a second time, not to bear sin, but to bring salvation to those who are waiting for him.”

Apparently, waiting is for chumps. We can all get in.

I feel like Bell has written his book in response to a “Turn or Burn” theology. You can probably build a big church on “turn or burn” theology, scaring the hell out of everyone. I think you can also build a big church by preaching there’s no such thing as judgment and choices you make have no eternal consequences. Somewhere in between those two is a Biblical call to authentic, holy grace. Grace which “teaches us to say ‘No’ to ungodliness and worldly passions, and to live self-controlled, upright and godly lives in this present age, while we wait for the blessed hope—the glorious appearing of our great God and Savior, Jesus Christ, who gave himself for us to redeem us from all wickedness and to purify for himself a people that are his very own, eager to do what is good” (Titus 2:12-14).

On page 2, Bell asks the question:

If there are only a select few who go to heaven, which is more terrifying to fathom: the billions who burn forever or the few who escape this fate? How does a person end up being one of the few?

Being born in the right place, family, or country?

Having a youth pastor who “relates better to the kids?”

God choosing you instead of others?

What Bell doesn’t do is tell us what Jesus said, “Enter through the narrow gate. For wide is the gate, and broad is the road that leads to destruction, and many enter through it. But small is the gate and narrow the road that leads to life, and only a few find it” (Matthew 7:13-14). He makes it sound like this concept of only a “few” is the idea of some narrow-minded traditional preacher who isn’t enlightened about the love of God.

No, Rob. This was the idea of a God who “so loved the world that he gave his one and only Son, that whoever believes in him shall not perish but have eternal life” (John 3:16). It is through his love and by his grace that you become one of those “few.”