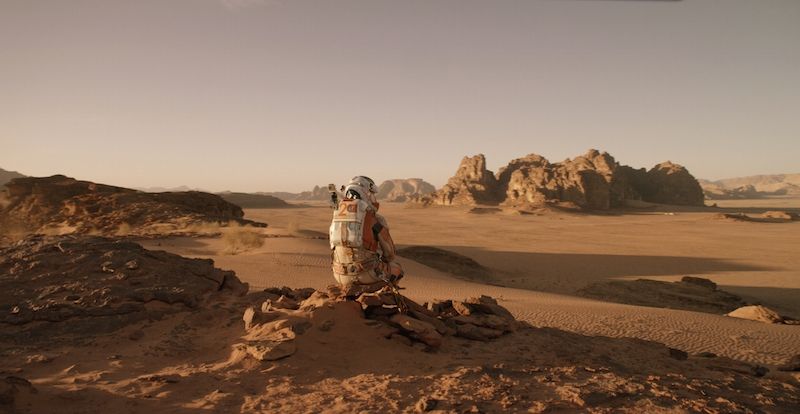 The Martian and the Cross

By Bret HammondSeptember 23, 2015No Comments

The Martian and the Cross

I picked up a copy of The Martian the other day. It’s a gripping novel that’s soon to be released as a movie. Several friends recommended I read the book first and—true to their endorsements—I couldn’t put it down!

The Martian tells the story of astronaut Mark Watney who gets left behind on Mars after a storm forces his fellow astronauts to abandon the red planet. Everyone thinks Watney is dead but he survives by luck and his own ingenuity. Being a mechanical engineer and botanist he sets about the work of making his home habitable for him and the few plants he can grow.

There are a few references to God here and there in but the book concentrates mostly on Watney’s scientific knowledge and his spirited attitude for survival. There was one portion of the book though that made me stop and think.

Watney needed water to survive. Without it he would die. Finding water on Mars was impossible, but he had brought the two ingredients he needed to make his own: oxygen and hydrogen. However, combining them would require combustion and NASA—true in the novel and true in life—designs their spacecraft without any combustible material. A lesson learned in the tragedy of Apollo 1.

It’s at that point that Watney finds a small wooden cross that had been brought along by a fellow astronaut who was a devout Catholic. It’s the only piece of wood available on Mars. Watney carves off a part of the cross and uses it as a make-shift match to ignite his oxygen/hydrogen fire and save his life.

“I chipped his sacred religious item into long splinters using a pair of pliers and a screwdriver. I figure if there’s a God, He won’t mind, considering the situation I’m in.”

Whether the author knew it or not, he presented The Martian with the only means of survival that anyone on earth has—the cross of Jesus Christ.

Paul wrote in 1 Corinthians 1:18, “For the word of the cross is folly to those who are perishing, but to us who are being saved it is the power of God.” In order for us to be saved God’s Son had to be broken on the cross. The sacredness of his sinless body splintered, broken and bleeding. It’s our only means of survival.

There are moments right here on earth when we feel as hopeless and alone as Mark Watney on Mars. The good news of Jesus Christ is God has entered our lives with our only means of survival—our only source of hope. And he paid for it with the blood of His Son spilled on the cross of Calvary.