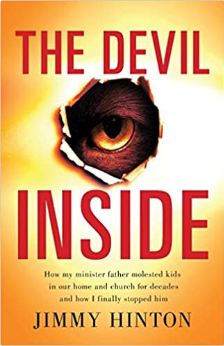 The Devil Inside, by Jimmy Hinton, a Review

By Bret HammondMay 2, 2021No Comments

The Devil Inside, by Jimmy Hinton, a Review

The Devil Inside: How My Minister Father Molested Kids In Our Home And Church For Decades And How I Finally Stopped Him, by Jimmy Hinton is a book you cannot afford to miss.

I’ve lost track of the number of times I’ve described a book as “a difficult but necessary read.” The Devil inside, by Jimmy Hinton, redefines how I think of books that fit those categories.

In 2011, Jimmy’s sister, Alex, confided in him that their father had sexually abused her as a child. Jimmy was serving as pastor of the church he had grown up in—the same church his father had served before him. After turning his father over to the police, others began coming to him with similar stories of his father’s abuse. His father had always been his hero and role model. Jimmy’s world was rocked and would never be the same again.

The Devil Inside His Family

Hinton writes autobiographically, drawing the reader into his story and the horrors of the revelations of his father’s double life. You feel his childhood admiration for his father along with him, gaining an appreciation for his upbringing and the indulgence he received as a child. If he had written simple facts, consequences, and lessons learned, that would have been fine. By inviting us into his story, Hinton calls his readers to feel, react, and maybe even be aware of the possibilities of their own troubles closer to home.

There was much that shocked me, but, sadly, not a lot that surprised me. One moment in the book that brought out a gasp for me was on page 68, where Hinton writes of cleaning out his father’s car. In the front seats, he found CDs from Christian psychologists on how to connect with kids. Hinton writes, “This was my first real sense of just how dedicated he was to learning the psyche of children so he could manipulate them into doing whatever he wanted.”

I’ve read books about raising strong-willed children and offered classes using materials that sounded eerily similar to those found in his father’s car. How often we have provided encouragement with the best intentions only to have it perverted in the most despicable ways? It is not easy to think about those who might have misused what we offered for their own purposes.

The Devil Inside Church Leadership

Almost every survivor I’ve ever listened to – and there have been hundreds – has said that the trauma from how religious leaders responded far exceeded the trauma from the original sexual abuse.

There’s a lot here to process as a pastor. I’ve heard too many stories of churches that have quietly moved the abusers down the road, only to continue their atrocities elsewhere. I’ve counseled survivors who broke the news of long-respected saints living secret lives that no one dared imagine.

Hinton doesn’t let the church off the hook. He repeatedly indicts leaders who have turned a blind eye for the evil done to the most innocent under their charge. He writes on page 82, “Our kids can’t afford for us to sit idly by, hoping someone else will step up to the plate to protect them. Idleness hasn’t worked for generations, and it’s not working now. So now is the time for Christians to act. The church’s record on abuse should embarrass us. When secular researchers rightly name the church as the most dangerous place for children, it ought to spark a fight inside every one of us.”

“I Choose to Resist”

My heels are dug in. Standing in the same place that my dad did shows my congregation that I refuse to shrink back from evil. I will resist evil and turn evil into good. It’s not easy. Honestly, it’s exhausting and has cost my family dearly. But I refuse to let evil win.

Jimmy Hinton’s story doesn’t end with his father’s deception and abuse. He has taken his pain and turned it into a way to bring healing and hope to the hurting. Hinton offers training in handling child sexual abuse in the church, including training on understanding predators and survivors. His blog and podcast offer a wealth of information that I fear are not found in many other places. Hinton’s consulting and speaking work would be a worthwhile investment for churches looking to better protect and serve their people.

The Devil Inside is a difficult but necessary read. However, it is far preferred to the stories of another church or leader caught harming those in their care. Pastors and leaders, you owe it to your people to read this one and carefully consider Hinton’s advice.