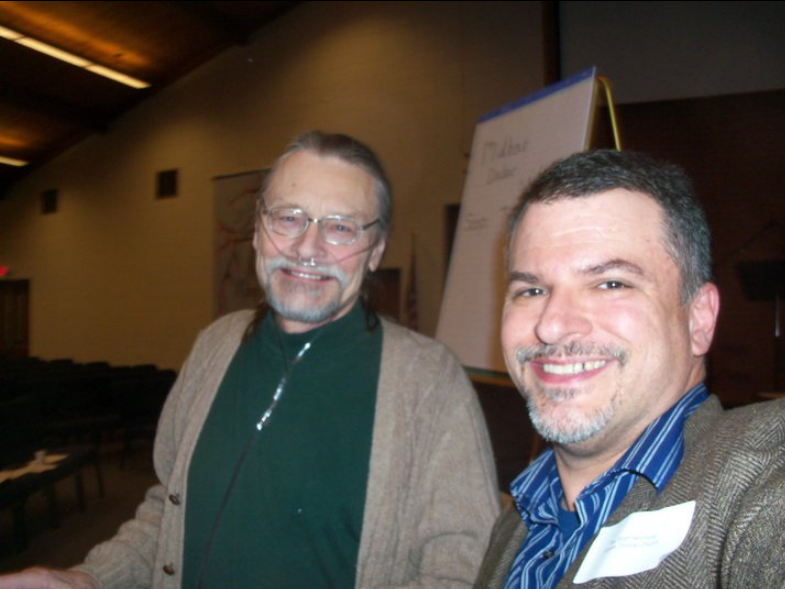 Walter Wangerin Jr. died last Thursday (August 5, 2021). I met Walter in the flesh twice, but I knew him long before in his preaching and his writing.

I had a copy of his “The Book of God,“ an elephantine tome that retells the story of the Bible in novel form. Unfortunately, the book was lost in our church fire. I’ve missed it for over ten years now.

I have a copy of his very personal “Letters from the Land of Cancer” that I have shared with many friends who have spent time in that same land. I’ve shared it because I lack words and experience and trusted Walter to speak into their lives better than I could.

I have a very old audio recording of one of his sermons. It’s a recording of a recording made by putting a tape recorder close to a television speaker, and it sounds as good as you might imagine. I’ve done my best to clean it up. It’s Walter’s remembrance of his grandfather’s death and what his grandfather taught him.

Both times we met, he was kind to me, laughed at my foolishness (I asked, “Remember that one time when you wrote the Bible?”). And he blessed me out of his suffering.

Peace I Leave with You

He was well into the land of cancer when I met him, dragging his oxygen around with him. I asked, “Having faced your own mortality, are the lessons your grandfather taught you about death the same lessons you would teach?” He smiled and nodded his head, “Yes.”

Grandpa turned his head my way, and when his eyes widened just a little bit, and I knew that he had seen me and he knew that I was there, then Grandpa told me what you do. In his suffering, he taught me what to do at six years old.

Lying on his back, Grandpa took his huge hand on a narrow arm, and he put it out to me, and he nodded, and he smiled. I understood immediately. This is what Grandpa was telling me to do. He was saying, “Six years old, come here.” And we shook hands once, twice. And suddenly, whatever death was, it was smaller than us.

Saturday morning, I happened across a book sale at St. Mary of the Woods. So naturally, I couldn’t pass by without checking it out. Among the treasures I found was a lightly used copy of “The Book of God” by Walter Wangerin Jr. that I gladly overpaid for in my donation. I didn’t know he had passed at that time, but it feels like grace that I found a copy.

Bless Me in Your Suffering

Below is a link to my recording of one of Walter’s sermons. I’m uncertain of the legality of sharing this, but I don’t think it’s available anywhere else. Also, if it IS available, the original sounds much worse than my copy. This was taken from the old Preaching Today tape series. I believe it was volume 60, produced in 1988.

The sermon itself is much older, having been given on television in Chicago on “The Sunday Evening Club.”