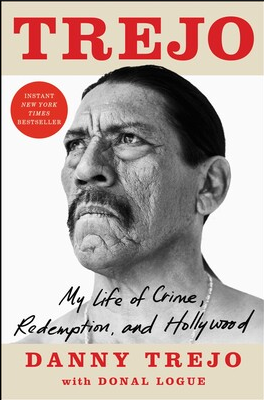 The Redemption of Danny Trejo

By Bret HammondAugust 18, 2021No Comments

The Redemption of Danny Trejo

A review of Trejo: My Life of Crime, Redemption, and Hollywood, by Danny Trejo with Donal Logue

Just do yourself a favor and read the book.

I first heard about Trejo a few weeks ago and thought it would be an interesting romp with one of the more extreme Hollywood personalities. I knew he had come up through some very harsh circumstances, so I was expecting fun stories of stabbings and wacky gangland antics. The book finally became available through our local library system last week. I added it to my Kindle instantly.

This is not a romp.

Danny Trejo’s world is as different from mine as night and day. His childhood was heartbreaking, and his rise to adulthood was marked by bad decisions that hurt him, the people around him, and complete strangers. Then, somehow, his story of redemption became about a grace that I still struggle to comprehend, and he seems to have lavished upon him. He brings a perspective that I need to hear and answers I need to hear more clearly, for myself and for others.

The prayer that hit me like a rock in the chest when I learned it in catechism, was the Prayer of St. Francis: “Let me not seek to be consoled as to console.” In that cell, I asked God for help and His answer was “Help.” I understood: Help others.

The violence in the book is disturbing. Danny doesn’t pull any punches as he tells the stories. He doesn’t seem to have pulled them in real life either. There’s some disturbing imagery here with tales of attacks in prison, on the streets, and at home. While much of the violence is done by the author himself, it’s never told with bravado, even when it sounds like bragging. Instead, the book brings you along as the author’s life and perspective change. You get a sense of the growth he went through in the process. He’s not afraid of calling himself out when reflecting on how childish his behavior or attitudes were in his younger days.

His younger days are genuinely heartbreaking. Danny Trejo grew up in a community that valued family but did not talk about their problems. It’s an understatement to say he wasn’t taught to handle conflict well. His broken home and abusive father led to more abuse down the road. He’s reached an age where he can reflect on the conditions of his childhood and confess what he lacked. It’s obvious he always hoped for better for his own children, even when that didn’t work out. Which is also heartbreaking.

From infancy on we develop the masks we wear to get by, pretending we’re not scared or hurt, that things are alright.

But then there’s the humor. Trejo can laugh at himself about his successes as well as his failures. So many stories of violence are followed with belly laughs at the absurdity of his own machismo. You can’t help but laugh along.

What Would Machete Do?

Trejo is a very different book than the ones I usually review on my blog. It contains a lot more F-Bombs than I care for, but not as many as I was prepared for. So why recommend it on a page devoted to ministry resources?

Trejo is genuinely a story of redemption. Danny’s faith goes beyond the nameless “higher power” of the twelve-step programs he’s worked with and through for years. While my own expression of faith and devotion had me silently pleading as I read, “Just a little further, Danny . . . you’re not far from the Kingdom,” I couldn’t help to recognize the grace and acceptance God has for this man who has credited his Creator with all his success.

And It’s humbling to consider that Danny Trejo prays more than I do.

Addiction doesn’t care if you think you are the king of recovery and you don’t get extra ducats that keep your kids and loved ones free of that shit.

Trejo is not for everyone, but I’m thankful it has been written for those who need it. Someone in your church, community, or life could definitely use this book. It would be an excellent read for someone struggling with addiction or the parent of an addict. Between the stories of homelessness and Hollywood, they will find a lot of hope.