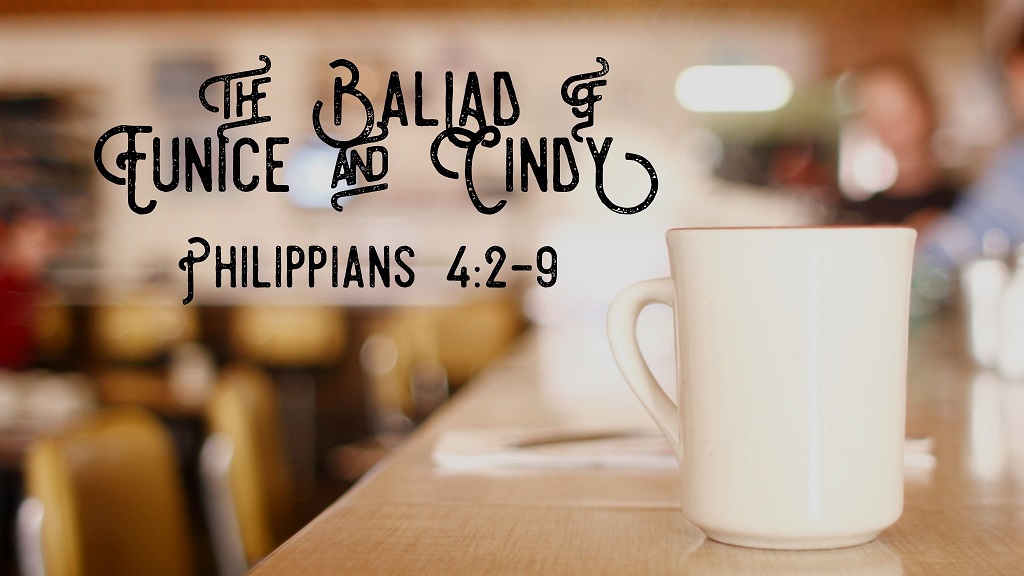 The Ballad of Eunice and Cindy

The Ballad of Eunice and Cindy

Real People was a popular tv show when I was a kid. Do you remember it? The show’s point was, in a world obsessed with celebrities and drama, we would see real people living real lives. As I recall, though, they probably could have titled the show “Real WEIRD People.” The ordinary people they began with weren’t grabbing the ratings, so they went with more extreme personalities.

Real People is where Richard Simmons got his start if that gives you any perspective.

Real People of the Bible

It’s easy to forget that the Bible is full of real people, just like us. They had their likes, dislikes, and personality quirks. The problem for us is, our lives are so far removed from their world that when we read about them, we make them out to be saints or somehow “other-worldly.” It certainly doesn’t help that their names are far removed from our contexts. Just reading Philippians, we know names like Paul and Timothy, but how many guys named Epaphroditus did you go to high school with? And how many women named Euodia and Syntyche do you know?

So Sunday, I brought the Philippian letter into our world and placed it at the local convenience store. What was the talk at the coffee shop like the morning after the letter was read in worship? How did the locals take Paul’s call for the church to help “Eunice and Cindy” agree with each other? What changes did the call for them to “be of one mind” make in their relationships and conversations?

Having sat at my share of coffee shops and enjoyed the local color, I think I have a good idea of what the conversation sounded like, even if it was a little one-sided like in my sermon. The real people of the Bible were just like you and me. Maybe sometimes that reminds us we’re all a little weird. But it should also give us hope in realizing that if they could hear God’s call and respond in love for their neighbors—even love for their own Eunice and Cindy—then we can too!

So How Did It Go?

This was only the second time that I’ve preached a first-person narrative sermon. Both have gone well and people have loved them. They even ask for more of them!

Engagement was very high for this sermon. I received many positive comments from people who don’t usually comment at all. They found it relatable, they participated in the message, and I think it truly hit them where they live.
A friend asked me what I had hoped to accomplish with the sermon. I responded that I had two goals (in no particular order):

1. To make Euodia and Syntyche relatable.

The names are far too removed from our context for us to even consider them to be real people causing real problems in the church. I wanted everyone to feel like they knew these ladies.

2. To show that this passage is ONE text.

Looking through my old sermons from the last time I preached Philippians, I saw I had divided this text into THREE sermons. I think most preachers probably do that. Of course, we love 4:4-7, but we can’t divorce it from Euodia and Syntyche and we shouldn’t remove the call to “think about these things” from the context either.

I’m enjoying the process of writing and preaching first-person narrative much more than I thought I would. They still stress me out and it’s a lot more work than a simple exposition of the text. But the responses have proven the value of this approach.